Back to South Africa after after two years away!

In view of the fact we work so closely with our producers and usually go over to visit every year, imagine the impact the pandemic has had on our operations. Staying in touch by videoconference and message, although very effective, cannot replace the warmth of human contact.

After two years of waiting, we were finally able to return to see our rooibos-producing partners in South Africa. You could really sense the enthusiasm as we looked forward to this reunion. Arlette Rohmer, the founder of Les Jardins de Gaïa, was able to meet up with old acquaintances, including Barend Salomo and Gwenaëlle Tête, the agricultural engineer in charge of monitoring the company’s sectors and producer partnerships. 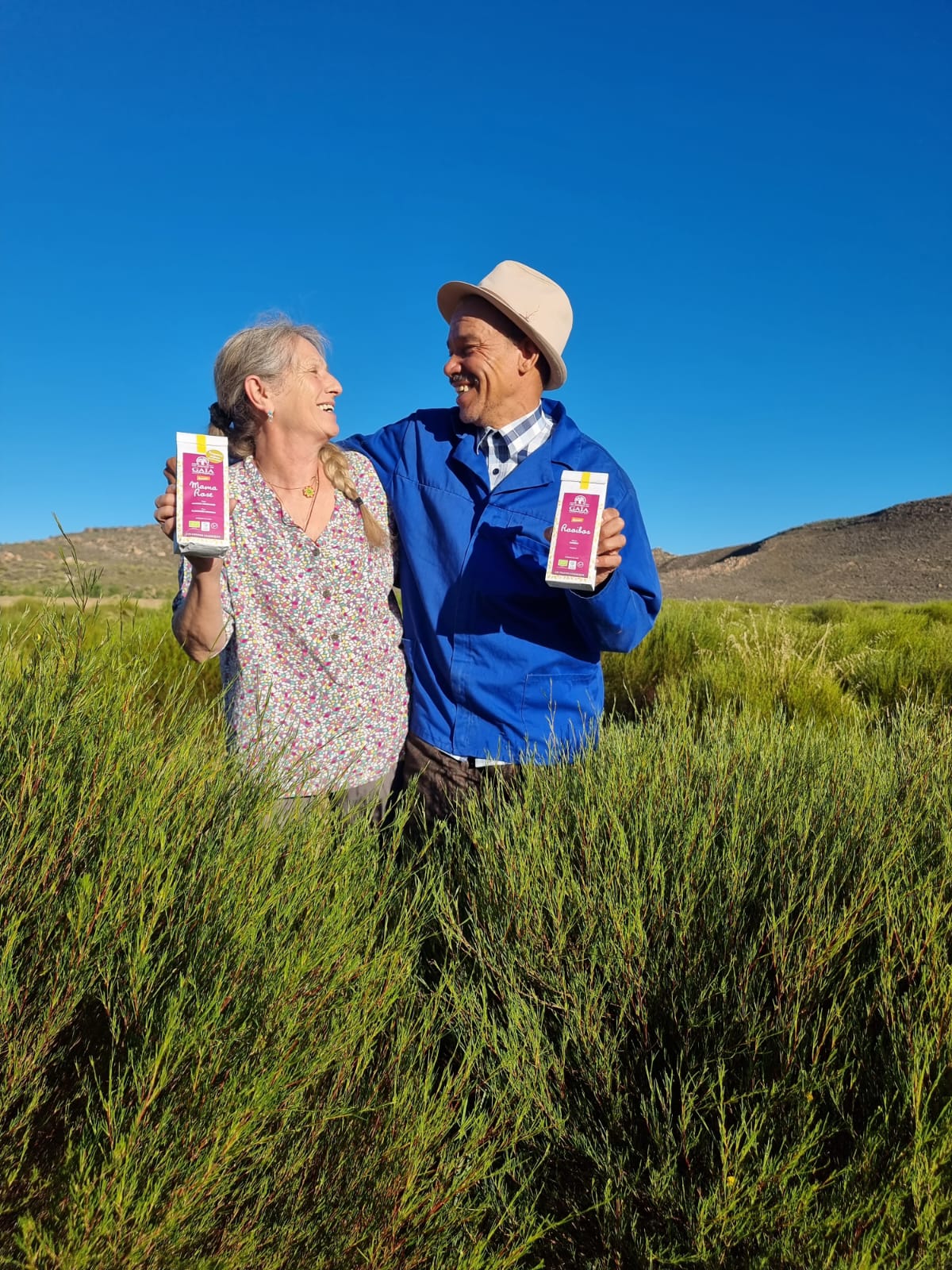 After two years without a site visit, our reunions with the producers of the Wupperthal and Heiveld rooibos cooperatives and their communities prompted many conversations – all of which took on a very particular character. Often choked with emotion, we all spoke from our hearts. Ultimately, we agreed that the pandemic had kept us apart for a while only to reunite us once more ready to take a fresh look at the work we do together. Conversations about the past, present and future allowed us to take stock of our long association, something we had never done in this way before.

But more than anything, by sharing our common visions and dreams, we have all been re-energised and gained fresh motivation.

There were extensive discussions about producer organisation dynamics and the passing on of skills from one generation to another – the rural exodus of young people has become a major issue for the future. New avenues of work were proposed – in particular through tools such as the fair trade premium and the opportunities it can afford – to discourage young people from being lured away by the attractions of the city, abandoning a whole sector of South African culture. A huge effort is underway to encourage young people to stay in their communities.

The impact of the pandemic on them and on the standard of living of cooperative employees was also at the centre of the debate, with the hope being that – as here in Europe – we are approaching the end of the tunnel.

Gwenaëlle has already worked in the past on the problem of setting up a fair floor price, allowing greater security for the cooperative employees and this field visit enabled her to gather new testimonies and get a clearer view of the situation. 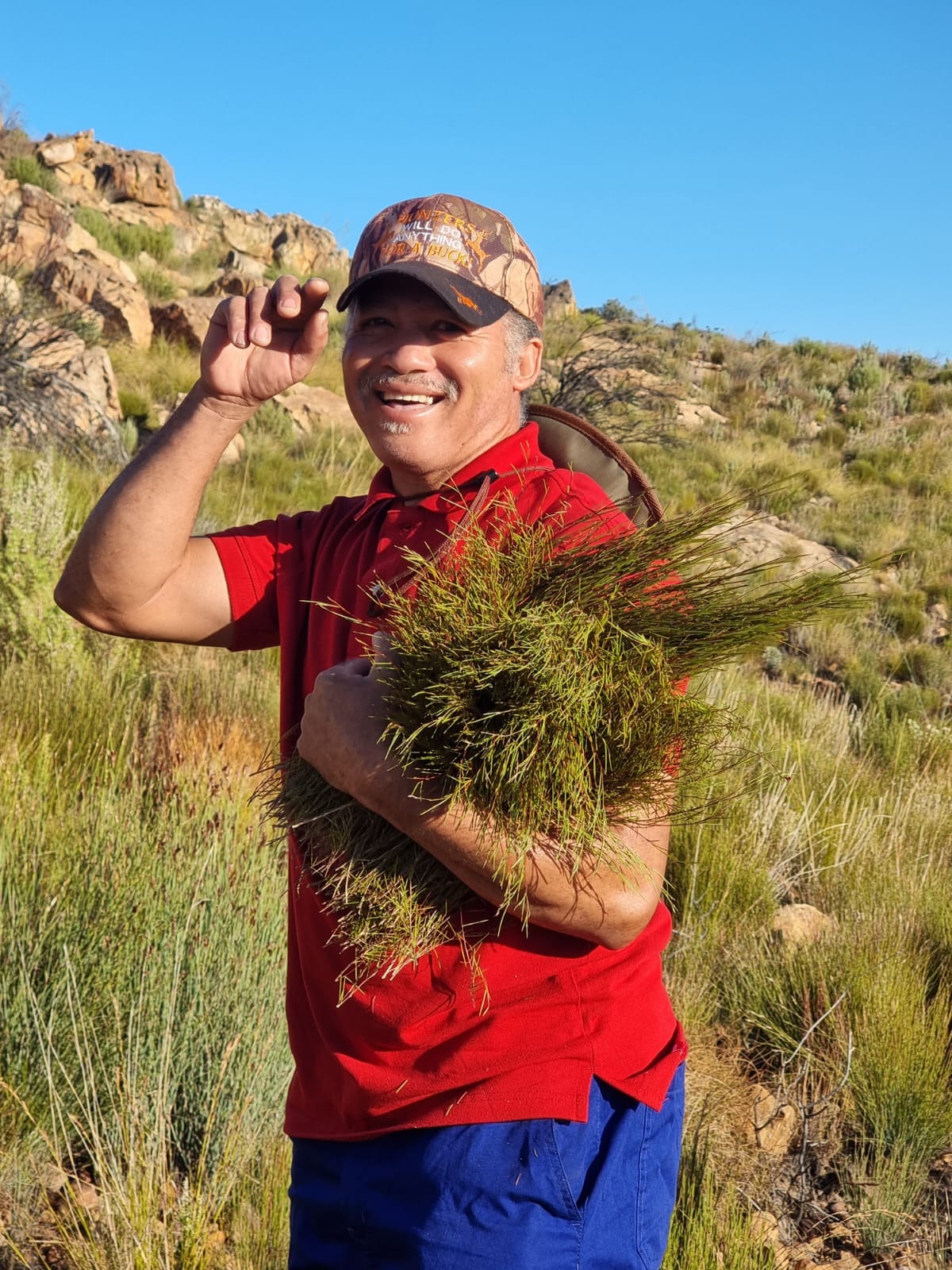 A provisional estimate of the 2022 harvest which Arlette and Gwenaëlle had the pleasure of participating in was also drawn up. We can already tell you that the quality and the quantities are very much there, with a special mention for the Demeter-labeled rooibos, which began to be grown in 2015 and is a real success.

Monitoring the impact of climate change and the action taken in terms of adapting to it continues. For the moment, the impact is relatively well controlled. But more and more producers are beginning to see the attraction of biodynamic agriculture which makes the rooibos bushes more adaptable.

After a promising start in the very remote and difficult-to-access area of Vaalheuning, situated at an altitude of 910 metres in the Cederberg massif, the viability of the experiment was confirmed. Arlette and Gwenaëlle saw the progress of the crops and were particularly enthusiastic. After a tiring journey through spectacular landscapes dotted with geese, cows, free-range chickens and the wild flora and fauna that is home to leopards, baboons and thousands of birds, they found dense bushes in peak condition.

This bodes well for harvests in the future. The 22 producers who took part in the experiment and who work in biodynamics observed the excellent ability of the rooibos in this area to adapt to the drought periods of recent years. We have always thought of biodynamic agriculture as an agriculture for the land and for the future and this was confirmed in this enchanting setting, regarded as a “floral kingdom”, free from all forms of pollution.

Could rooibos be given a PGI?

Finally, there is an ongoing PGI project and Arlette and Gwenaëlle were able to discuss the documentation required for this with the producers, but more importantly the benefits it would represent for the rooibos crop from Wupperthal and Heiveld.

We will come back to the development of this project which could mark a turning point in the history of rooibos.

In the meantime, we look forward to the arrival of the first containers of this very promising 2022 vintage which will bear the hallmark of this happy reunion.

Barend Salomo shows us how his ancestors have been processing rooibos on this rock for five generations. You can see that the rock has taken on a red hue from the fermentation of this bush which is native to South Africa.

Back to South Africa after after two years away!